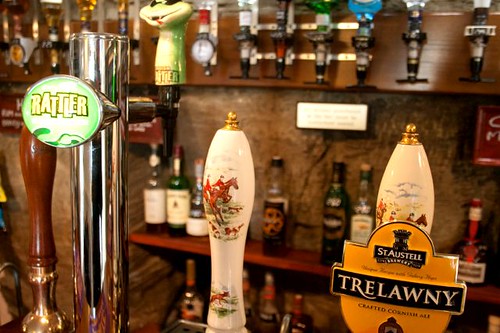 With kombucha becoming more common within the food and restaurant industry, a move towards serving the drink on tap is seeing increasing popularity.

Kombucha on tap works through draft and forced carbonation technology. Serving and storing kombucha by means of a keg on tap has a number of positive benefits, such as a lessened environmental impact and higher cost efficiency.

In this article, we will discuss how exactly kombucha on tap works, why it is much more beneficial and cost-effective, and how fans of the drink can go about using a kombucha keg at home.

How Does Kombucha on Tap Work?

Kombucha on tap works by means of kegging the drink and serving it through a faucet attached to the keg. Unlike the traditional bottles seen used for storing kombucha, kegs allow for a much larger quantity of liquid to be held within.

These kegs are stored often in coolers or large refrigerators and are most commonly seen within a café, bar, or restaurant setting. However, kegs can also operate within a person’s home if they have the proper space and equipment in place for the keg to be stored.

For those familiar with draft beer, this system of operation may seem familiar. In fact, kombucha on tap works in the exact same way as draft beer technology. As for preventing the drink from going flat, most often kombucha is kept in its fizzy state through the use of forced carbonation.

A beer draft system is most often seen in restaurants and bars and involves the use of several kegs connected to a dispensing system that pumps carbon dioxide gas into the liquid. This gas is what pushes the drink through the connected beer lines from where the kegs are stored in a freezer to the taps from which the beer is poured.

When kombucha is served on draft in a commercial setting, this is also how the system works to get the kombucha from the keg to the tap. By storing kegs in the freezer, the contents are kept colder and fresher for much longer periods of time.

For those looking to use a keg of kombucha at home, a kegerator is a good option to consider. Kegerators work according to the same mechanics as a traditional draft line system, however, they are more compact and often resemble mini-refrigerators. According to Keg Works:

“A kegerator is a self-contained refrigerated beverage dispenser equipped with beer and airlines, an air tank, regulator, draft beer tower and faucet.”

These devices are portable and easy to fit in smaller spaces. Generally, they are designed to hold one to two smaller kegs. They are well suited for people looking to have a kombucha keg readily available in the home, or for smaller food and drink companies that wish to serve kombucha without installing an entire draft system.

When carbonating kombucha in a keg there are two options to choose between: relying entirely on the natural processing of sugar in the kombucha to carbonate the liquid or utilizing force carbonation.

Force carbonation is the direct infusion of CO2 into the liquid within a keg from a gas cylinder. This is generally considered a more effective way to ensure long-lasting carbonation of kombucha or other drinks within a keg.

Keeping kombucha well carbonated is highly important when kegging the drink, as without the fizziness of carbonation many people find kombucha to be too sour and similar to vinegar to be enjoyable.

Benefits of Kombucha on Tap

There are many benefits to serving kombucha on tap rather than purchasing individual bottles, especially for individual fans of the drink that consume copious amounts every month. In general, both kegged and bottled kombucha offer a myriad of health benefits.

According to Healthline, these benefits include:

Individuals or households that choose to serve kombucha from a keg have much greater accessibility to the drink and greatly reduce the need to constantly buy bottle after bottle. The two biggest benefits of kegged kombucha are a lessened environmental impact and a higher level of cost-efficiency.

When purchasing an individual bottle of kombucha, there is much more potential waste involved compared to serving from a keg. Kombucha is typically sold in glass or plastic bottles with plastic lids and labels. For those who regularly recycle, this may pose less of an issue as glass bottles are recyclable.

However, even recyclable bottles come with production costs that contribute to pollution and present potential negative environmental impacts.

According to Sunrise Sanitation Services, while glass is much more environmentally friendly than plastic, glass still involves mining that can lead to noise pollution, water pollution, disruption of ecosystems, and large amounts of gas and energy needed to transport the glass products.

While glass may be more eco-friendly in terms of chemical composition if improperly disposed of it can pose major physical dangers to wildlife and their respective habitats. Additionally, while glass may be recyclable, according to Great Forest Sustainability Solutions:

“Glass is difficult to sort when broken, and if broken down too finely, glass may become too difficult to reprocess. When recyclers find it too difficult or expensive to separate out glass, they send the entire stream to the landfill.”

Comparatively, when using a keg of kombucha, glass bottles are not at play at all. Plus, kegs are often reusable and can generally be returned to manufacturers or brewers to be processed for reuse, rather than sent to a landfill.

When purchasing kombucha as individually packaged bottles, the cost can rack up quickly if you are drinking several bottles per week. 16-ounce bottles can range in price but are generally sold in supermarkets such as Walmart for between $4 – $5, according to The Simple Dollar. The per fluid ounce cost is around $0.25.

Comparatively, kegs of kombucha can be found for a cheaper overall cost, depending on the brand. While some brands and producers of kegs of kombuchas can still be pricey, kombucha kegs can nonetheless be found priced around $0.15 per fluid ounce. This is especially true when purchasing through a wholesaler.

Home-brewing kombucha is becoming more and more popular amongst fans of the drink. Purchasing a keg to store home-made kombucha in can greatly decrease the costs spent on not only the ingredients used to make the drink but also the costs of purchasing individual glass bottles for storage.

As we discussed, a kegerator may also be a wise purchase for households that regularly enjoy kombucha, as kegerators entail all the technology of a draft and tap system while also being compact like a mini-refrigerator, making them much easier to incorporate into a home kitchen design.

Kombucha on tap is operated by the same mechanics used for draft beer. Kegs are in many ways a better way for kombucha to be consumed and stored, as they cut down significantly on costs and environmental impacts.

Plus, for those who brew at home, kegs and kegerators are a great and reusable alternative for storing your home-made kombucha compared to spending endless amounts of money on bottling equipment.

“drinks on tap” by jason nahrung is licensed under CC BY-NC-SA 2.0