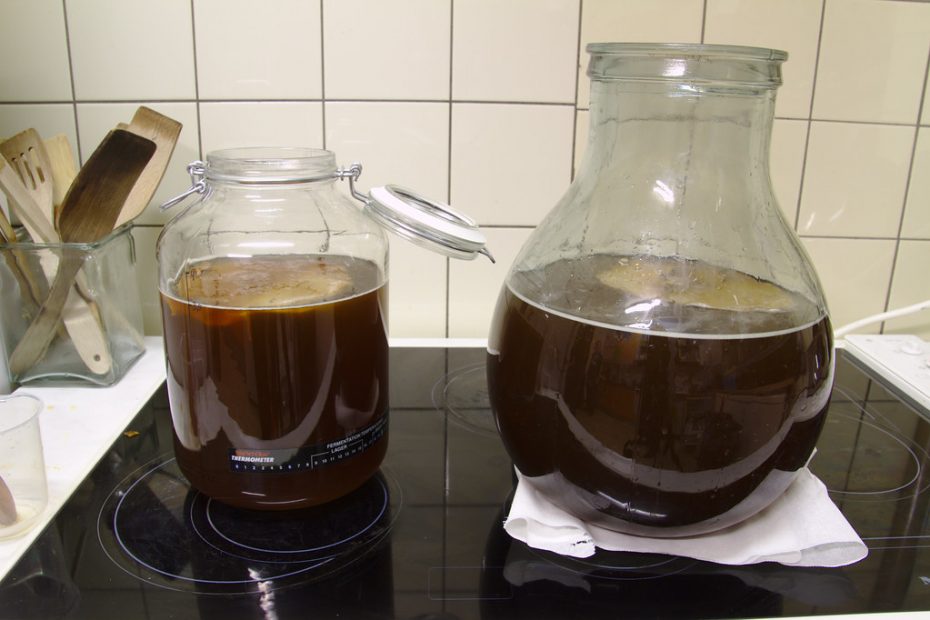 Should You Second Ferment Kombucha?

Kombucha is one of the most common home-fermented beverages. It’s relatively simple and approachable to make for new fermenters. Kombucha is also packed full of healthy bacteria and antioxidants.

The second fermentation for kombucha is not technically required, but that doesn’t mean you shouldn’t. It will add both flavor and carbonation to your kombucha if you do it correctly.

The second fermentation allows you to personalize your flavor for your kombucha, allowing for different fruits and flavors to be added. On top of that, the second fermentation is what gives fermented drinks that tongue-tingling carbonation we all love through the bottling process. It also grants a higher ABV, if that’s what you’re looking for.

Contents hide
1 Is it Necessary to Ferment Kombucha Twice?
1.1 Kombucha First Fermentation
1.2 Kombucha Second Fermentation
2 Flavors for Your Kombucha
3 What Exactly is Kombucha?
3.1 How Home-made Kombuchas ABV Differs From Store Bought
3.2 Controlling Your Kombuchas Alcohol Content
4 Why Should You Bother Making Your Own Kombucha?

Is it Necessary to Ferment Kombucha Twice?

To make a long story short, no, you do not need to ferment kombucha twice. It’s perfectly safe and still plenty tasty to just do a single ferment and leave it at that. Plenty of people actually prefer their kombucha like this, sort of a more pure fermented tea.

I highly recommend you at least try single fermented kombucha before you decide to go forward with the second fermentation. You’ll never really know what you like without at least giving it a shot first, right?

The second difference you’re going to notice between the two drinks is taste. Even without any added flavors, the bottled kombucha will be drier, less sweet, then the pre-bottled stuff. This is because of the natural yeast in your drink will consume the sugars you put in to sustain itself. When the yeast does this, it will take in sugar and put out both carbon dioxide and alcohol.

When we refer to “Bottling,” it’s not just any old bottle that will do the job. For your second fermentation, you want to find a container that’s both sturdy and can be made air-tight. Both of these are important things to remember! When the yeast out-puts the carbon dioxide, it’s actually lighter than the kombucha itself.

This means that if your bottle isn’t air-tight, the carbonation will just float away, and you’ll still be left with flat kombucha. If your bottle is air-tight, however, then all the carbonation will stay inside your drink, giving it that nice fizz. But be careful, it can become carbonated fast, thus introducing the need for a sturdy bottle. A weak plastic bottle will go POP and burst much too easily.

The most commonly recommended bottle is made of glass, with a stopper as a cap. There’s no set timeline that will tell you when your kombucha is done bottling, but anywhere from 4-14 days is normal. Also, make sure you release some air from the bottles every other day or two, known as “burping.” This prevents too much pressure from building up.

Flavors for Your Kombucha

What’s probably an even bigger draw to most people about second fermentation, other than the carbonation, is the ability to personalize the flavor of your kombucha. Notice how earlier I said, “Even without any added flavors…”? Well added flavors, there are plenty. The most common flavors are fruit, but you can flavor with almost anything, from herbs and spices, to even essential oils.

Here’s a list of just some kombucha flavor ideas to get you started:

As you can see, the flavor of your kombucha is really only limited by your imagination. As for how much of each flavoring to add, that’s really all about trial and error. This article at YouBrewKombucha goes into a little more detail about where you can get started with your flavor experiments. They’re a great source of information on getting started with your Kombucha Fermenting hobby.

What Exactly is Kombucha?

If you ask most people, kombucha is simply a fermented tea drink that’s advertised as being good for your gut health. Technically though, Kombucha is two things. Yes, it is the drink itself, but Merriam-Webster also defines it as “a gelatinous mass of symbiotic bacteria and yeasts grown to produce a fermented beverage…”.

This is affectionately, and more simply, referred to as the “Mother,” or commonly in kombucha making as the Scoby. Scoby is an acronym, just an easier way of saying “Symbiotic Culture of Bacteria and Yeast.” If you use the word Kombucha, though, usually people will just assume you’re talking about the drink itself.

You might have noticed earlier I mentioned that in addition to carbon dioxide, yeast also outputs alcohol. But you might be wondering, then, how come you can buy kombucha from the store without any ID or regulation?

Well, those specific bottles you can buy do have some alcohol in them, but in order to be considered “non-alcoholic,” they simply need to have less than 0.5% ABV. Don’t worry, the kombucha you make will not be this low if made properly. Usually, home-made kombucha will be between 3-4% ABV.

Yes, that is still low compared to even beers, much less other fermented drinks, like mead. The reason for this is actually that Scoby from before. The yeast from the Scoby might produce alcohol, yes, but the bacteria from the same Scoby actually consume some alcohol in turn. This is what results in the low ABV.

Should you want to make a non-alcoholic kombucha, for maybe kids or alcohol sensitive people to enjoy, it’s possible; you just might need a few extra simple steps. The simplest thing to do would be to pasteurize your drink, right before the second fermentation. This simply involves heating the liquid up enough to kill the yeast, so it can’t make alcohol.

Daniela Klein goes into more detail about both pasteurization and other methods of reducing alcohol content over at Kombucha Home. She goes into good detail of specific temperatures and how to do it safely in her article.

Why Should You Bother Making Your Own Kombucha?

There are dozens of reasons you should make your own kombucha at home. It’s not just limited to health benefits either, although those are absolutely a benefit.

Here are a couple of reasons you should start to ferment your own kombucha:

There is one more reason you should start to make your own kombucha that’s incredibly important.

It can teach you methods you can use in other fermenting or brewing tasks! The method of feeding sugar to yeast to produce carbonation and alcohol is something that can carry over into many more drinks. In fact, it’s the exact same as beer, mead, or hard cider.

Now, of course, I can’t recommend you start out brewing anything too complicated, like beer, too soon. You should start with something simpler, to test the fermenting waters and see how it suits you. And that is why I believe you should ferment your own kombucha.

—
“My kombucha batches ^_^” by dvanzuijlekom is licensed under CC BY-SA 2.0