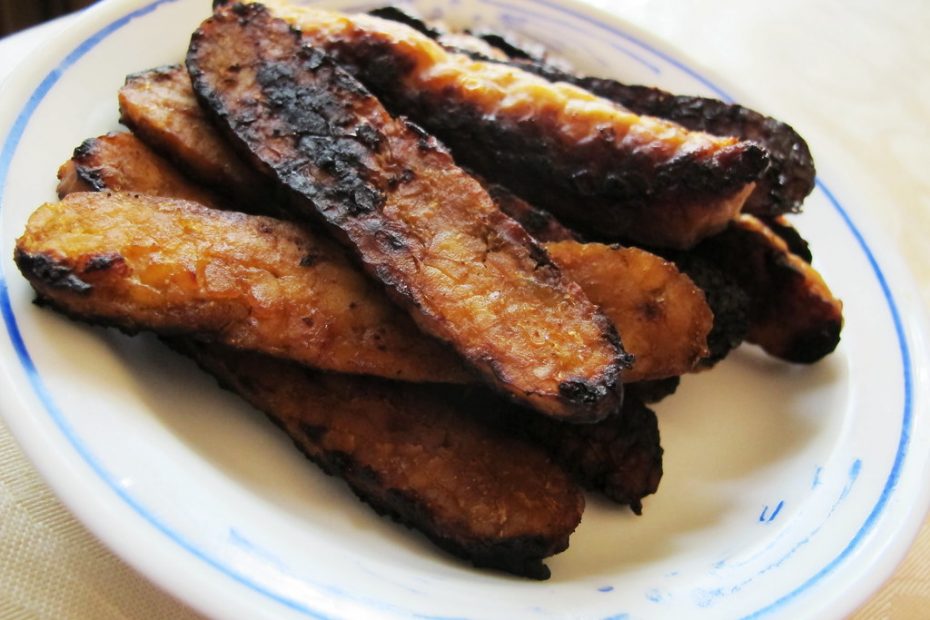 Eating vegan, vegetarian, or healthy meals doesn’t mean that you have to give up your appetite or favorite foods. In reality, recipes that require meat substitutes are easily created and found. Tempeh bacon is an excellent example of this and one of the more popular foods.

Tempeh bacon is made of Tempeh, a soy-based meat alternative made from fermented soybeans. It is similar to tofu but tends to absorb flavors better and is therefore popular for more savory dishes. It does not require draining, pressing, or any other type of preparation before use.

Tempeh is available at most commercial grocery stores as well as smaller, more local spots. Let’s learn more about this fascinating food.

What Is Tempeh Bacon?

Tempeh bacon is a vegan alternative to bacon made from pork, turkey, or other animal meat. It’s one of the best bacon replacements because tempeh retains the crunchy texture and smoky flavor of “traditional” bacon despite being plant-based.

Though often compared, tempeh is actually healthier than tofu and does better at absorbing flavors during the cooking process. Generally, tempeh comes in two varieties:

If properly prepared, there are minimal differences between the two. However, for anyone with gluten allergies, “regular” tempeh is certainly preferred.

In addition to being delicious, tempeh is also high in protein, low in fat, and completely free of sodium, cholesterol, and trans fats. (Unless you introduce these through added ingredients or the cooking process.) This makes it a common ingredient in vegan, vegetarian, and healthy living dishes such as:

And, of course, you can eat it all by itself!

To make tempeh bacon, you’ll need tempeh (of course), some type of marinade, and any type of oil for frying.

An alternative to tempeh is seitan, for any readers that can’t eat soy. Similarly, tarami and soy sauce (common marinade ingredients) can be replaced with coconut aminos or salt.

Tempeh bacon is best served fresh, but can also be refrigerated in an airtight container. You can reheat and eat it up to a week after cooking.

There are two basic components to tempeh bacon recipes: the marinade and the tempeh itself. Usually, the marinade is more complex and has more ingredients, which balances out the simplicity of the tempeh.

In this recipe the marinade really emphasizes the smoky flavors:

While in this recipe, the marinade includes apple cider vinegar for a more complex taste:

Another popular marinade is shown in this recipe, which adds the salt and pepper rather than using them as seasoning just for the tempeh:

There are many ingredients that run throughout all the marinade recipes, such as soy sauce, maple syrup, and paprika. However, there is still room for creativity and customization. Change the marinade ingredients according to your personal tastes and don’t be afraid to experiment.

How to Make Tempeh Bacon

For the tempeh bacon, gauge how much you need. Along with how thinly you slice the pieces, this will determine how much bacon is actually produced. Generally, 8 oz. of tempeh (250 g) sliced at one-fourth inch thick will produce approximately 10 bacon strips. However, larger quantities can be purchased.

For the best results, boiling or simmering the tempeh is recommended prior to cooking. Hotter (i.e., boiling) water will result in softer tempeh. Boil or simmer the block of tempeh for roughly 8-10 minutes, after which point you can remove it from the water, pat it dry, and slice it. Though not necessary, this extra step ensures the tempeh bacon is soft on the inside and crunchy on the outside.

Soak the tempeh in the marinade for as long as desired. Some people soak it for just a few minutes, while others will let the tempeh marinate overnight. Still other forgo soaking entirely, and simply brush the marinade on right before cooking.

To cook the bacon, you’ll just need salt and pepper to taste. There are two cooking methods:

If you choose to fry the tempeh, you can also add any leftover marinade to the pan for even more flavor. Turn the stove to medium heat, add the oil, and let it all heat up. Fry each side for three or four minutes, or until golden brown and crispy.

If you choose to bake, turn the oven to 350 degrees F and let it warm up. Line a baking sheet with parchment paper and place the tempeh on the pan, evenly spaced. Back for 30 minutes, stopping halfway through to flip the bacon.

Though tempeh bacon is fairly straightforward to make, there’s always tips and tricks to improve the process. So below are the best cooking tips for how to create the perfect batch of tempeh bacon.

With these tips in mind, anyone can whip up the perfect back of bacon in just minutes. Often considered an essential breakfast food and a versatile garnishment in its own right, bacon is both satisfying and easy to make. Tempeh bacon lives up to its namesake with both of these traits, and is as much a delight to munch on as it is to make.

“Tempeh Bacon” by tomatoes and friends is licensed under CC BY 2.0